After two days of meetings, our chapter sent a group of representatives to Capital Hill for scheduled visits with elected officials from Northeast Florida to promote issues important to the commercial real estate industry. The following members were on the trip:

The meetings were very productive, as our legislators recognize the importance of commercial real estate development in creating a healthy business climate n Florida, one of the leading contributors to the domestic economy.

Some of the issues discussed were carried interest, tax extenders and waterways funding to allow federal authorization of Mile Point funding for the port.

• Carried Interest, also known as a “promoted interest” or a “promote” in the real estate industry, is a financial interest in the long-term capital gain of a development given to a general partner by the investors in the partnership.
• Currently taxed as capital gains, proposals to change the tax treatment of carried to ordinary income would result in a dramatic tax increase (from 15 percent to as high as 35 percent) for many real estate development partnerships.
• More importantly, if enacted, such a change would significantly hinder future commercial real estate development activity.
• NAIOP strongly opposes changing the tax treatment of carried interest from capital gains to ordinary income. 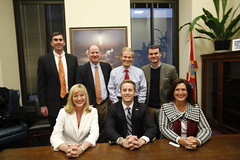 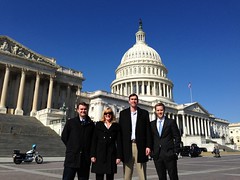